Yesterday I came downstairs and exchanged looks with my son, who was sitting in the kitchen. We were listening to a noise coming from the basement.

“That treadmill does not sound good,” I said.

Seconds later we heard a horrible sound from the basement, and I ran down, to see if the certain someone who had been running was in a pile of broken bones at the end of the treadmill. I’m not going to mention his name, because he wants to avoid any sassy comments about how the machine broke.

Anyway, it didn’t seem weird that the treadmill broke, because everything we own has been in the shop in the last few weeks. The truck needed an oil change, which led to a coolant hose change, which led to a new right ball bearing. The car goes in for new rotors today, which were discovered needing to be replaced when we bought new rims because a certain someone can’t manage to swing wide enough to avoid driving over curbs. (Not the same someone who was on the treadmill when it broke.)

“We’re in a season of everything needing repair right now,” I told my mom on the phone last night.

“Isn’t it always that season?” she said.

In all of this, I’m hearing Jesus’ words:

Do not store up for yourselves treasures on earth, where moth and rust destroy, and where thieves break in and steal. But store up for yourselves treasures in heaven, where moth and rust do not destroy, and where thieves do not break in and steal. (Matthew 6:19-21 NIV)

Do you hear Jesus’ declaration?

Everything you own is eventually going to wear out.

So let’s all think about heaven for a minute.

In heaven, they will not use salt on the roads as ice melt –that will corrode the underbelly of our vehicles while we’re sleeping.

In heaven, we’ll be able to leave the doors of our cars unlocked when we go into Target. (There will be a Target?)

In heaven, we won’t spill greasy food right down the front of our favorite skirt.

In heaven, the garbage disposal will never form a lake under the sink.

When I was in Uganda several years ago, we were in heavy traffic, which included cars and goats. A man on a bike tried to ride between vehicles. He got too close and caught his back wheel on a car. I watched him pull his bike off the road and saw his shoulders slump in defeat when he saw the destroyed wheel. Probably that bike was his means to make a living. 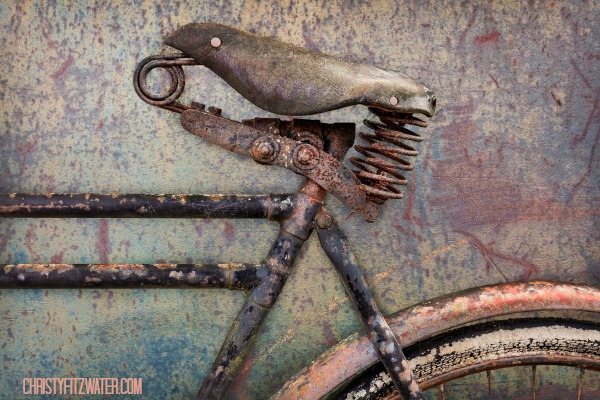 Of all the experiences I had in Africa, that memory comes to my mind most often and makes my heart ache. I wanted to stop our van and buy him a new bike.

Our stuff is going to break or get lost or stolen. But a day is coming when nothing will wear out or fall apart on us ever again. Cars won’t need repaired, and treadmills won’t crater underneath us. Bicycle tires won’t get busted. We just need to hold on until heaven and, in the meantime, make all our investment in treasures that will last.