My daughter’s college roommate made friends with some students from China, and one night they all went out to a Chinese restaurant together.

Jayme and her roommate were given one menu.

The Chinese students were given another menu, written in Chinese. 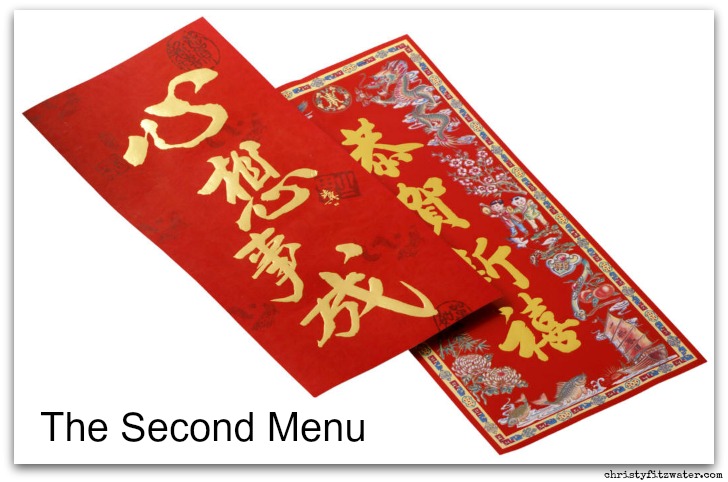 The girls asked these students why they were given a different menu. Come to find out, one menu was Chinese-American food, and the other menu was authentic Chinese food. So the Chinese students offered to order for the girls off of the Chinese menu. They spoke to the waitress in Chinese and wrote down their order on a piece of a paper to hand to her. The girls had no idea what was ordered for them until it arrived at the table.

When the food came it was unlike anything on the American menu, and instead of being served on individual plates, it was served family style. THIS was Chinese food.

Paul says, “In the same way, the Spirit helps us in our weakness. We do not know what we ought to pray for, but the Spirit himself intercedes for us with groans that words cannot express.” (Romans 8:26 NIV)

Sometimes it does feel like my prayer is too weak for the occasion.

But then I look over and see the Spirit of God at the end of the table, holding a different menu. In a different language. And He knows the owner.

That’s when I realize there are more options available than I am aware of, and I wonder what they are. It piques my curiosity, and it scares me. (Jayme’s friends ordered squid!)

But a few verses later, in Romans 8:28, Paul says, “And we know that in all things God works for the good of those who love him…”

So I can put all those future outcomes in the hands of the Spirit and let Him order what I need. The promise is that it will be good when it arrives, but I won’t know what it is until it’s placed in front of me.

I’ll have what He’s having.