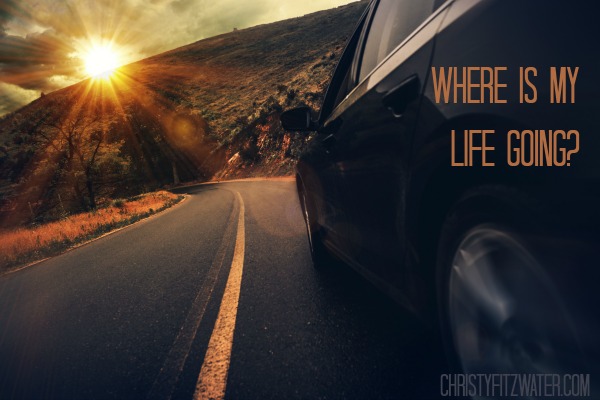 We decided it was just too dangerous, this owning of a motorcycle, so he donned his helmet for the last time. We were taking the bike to a friend’s shop where he could sell it for us. I knew generally where the shop was but not exactly, so I followed closely behind Matt and watched for his hand signals.

After half a mile, he took a right onto a residential road.

What in the world is he doing? I thought. He couldn’t hear me from the car, but I was telling him how I most certainly would not have gone that way. I followed him on quiet streets where I had never driven before, thinking he was crazy.

But then I remembered the 157 conversations we had had just like this throughout 24 years of marriage. How I expressed my great doubt that he knew where he was going and made logistical suggestions from the passenger’s seat.

I do have one of those annoying, always-right personalities.

He never gets us lost, though. For once in my life I remembered that fact and decided to zip the condescension and just follow the man, for Pete’s sake.

I hope you didn’t mind that I took us through all those back streets, he said once we got to our friend’s shop. I wanted to stay off the more dangerous roads.

He had planned his route ahead of time, to avoid busy streets.

Just like God. It’s just like God to have us taking the weirdest back path to someplace we would have driven straight to. And we ask, looking down our noses, What in the world are you doing? Why are you taking me this direction?

So there’s the whole driver’s seat, passenger seat thing that comes into play in our travels with the Lord. Who’s got hand to steering wheel and blinker? Who’s got foot to break? That would be the driver. The passenger only has a mouth and a lot of opinion.

Solomon gives us this proverb to live by:

In his heart a man plans his course, but the LORD determines his steps.  (Proverbs 16:9 NIV)

I see here two courses mapped out but only one realized. This could be one of the most dangerous verses in the Bible, with the potential death to our own plans. It is in this place where we decide if we are really going to confess Jesus as Lord.

And do we have enough hope and faith to follow Jesus’ course as the better route?

It’s time to say, Okay Lord, where ya takin’ me?