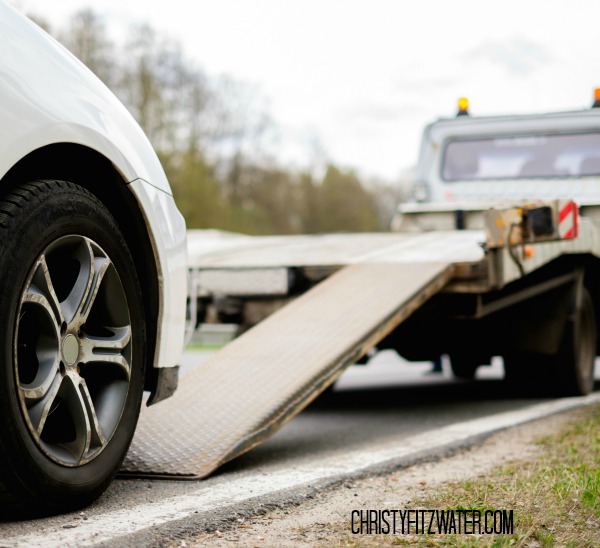 What was that? His alarm? That was weird and way too early on a Sunday morning. No wait –it was his phone.

I was only getting one side of the conversation.

“Where are you? Okay, tell me what happened. Are you off the side of the road far enough?” He turned to me when he heard my gasp, “It’s okay, honey. He’s okay.”

Caleb had left the house at 5:00 a.m. with three friends, to travel five hours in order to make their skydiving time. (Why? Why skydiving? But that’s another blog post altogether.) An hour later his transmission had given up the ghost on the side of the road.

In less than five minutes, Matt and I were dressed and driving two vehicles to meet the guys, so they could take one car on to their great skydiving adventure and we could take care of the deceased.

The next day, Matt and I debriefed about what was going through our minds as we drove around Flathead Lake, to see to a vehicle that we had no money to replace.

I had just finished reading Hope Heals, by Katherine and Jay Wolf (a highly recommended read.) In her 20s, Katherine suffered a massive brain stem stroke that left her with severe disabilities. She and Jay wrote about how they struggled being around normal people with normal problems after that, without being annoyed.

I could hear Katherine say to me, “Really? A blown transmission is the only problem you’re facing?”

As I drove, I thought of Katherine’s multiple surgeries, hearing deficits, and having to relearn to walk and talk and swallow. I thanked the Lord that we were only dealing with car problems.

Up ahead of me in his truck, Matt had been the first to see the emergency vehicles parked at a house in the neighborhood we were driving through. He took a right to avoid what was happening there.

“It put what we were experiencing in perspective for me,” he said. “I thought, ‘Okay, things could be a lot worse for us.’ He was thankful that we were the ones going to meet our son and not an ambulance and fire trucks.

Car problems are hard. I was just talking to a friend yesterday who heard my story and then said fiercely, “I think car problems are straight from the devil.” True that. We’ve done a lot of sighing and taking turns with furrowed brows about how we have three weeks to figure out the car thing before Caleb has to leave for school.

I was imagining if that car trouble had happened while Caleb was by himself driving to Texas. Or if it had happened while he was in the middle of Denver traffic. Instead, it happened on a very quiet highway early on a Sunday morning, and he was very close to home where we could help out.

Perspective is one key to a thankful heart, and I believe God put the Wolf’s story in my heart and the ambulance in Matt’s vision, to help us thank Him for the good within our hard time.

But gaining perspective takes mental effort on our part. The Wolf story was there. The ambulance was there. But Matt and I had hearts that were reaching for God in our traumatic moment, and I think that’s the only reason those things were helpful to us. We were looking for God. We were working to think well about our situation.

So what perspective do you have on your hard circumstance?

« You. #nofilter
Be That Person Who Stops at Enough »

My inspiration, to think about what I design and p

Montana. Time for supper to feel a little early ev

Field trip! Our quarantine buddies were getting a

Choosing to celebrate our risen Saviour with as mu