I don’t know what you did while you ate elevensies yesterday, but I reached over and grabbed the nearest book. (In my home, every room must have a clock, a box of Kleenex, and a half-read book.)

In the kitchen, I am currently reading The Tipping Point: How Little Things Can Make a Big Difference, by Malcolm Gladwell. What I discovered this morning will encourage you. 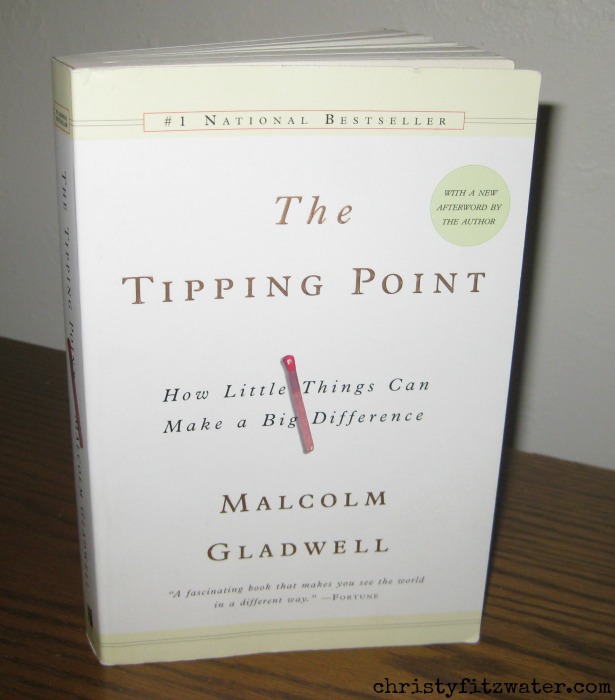 In 1990 the subway system of New York was a disaster. Crime was horrible, and the number of people riding was decreasing rapidly. People were jumping the turnstiles to ride for free, and the subway cars were filthy and were covered, every inch, with graffiti.

Everyone thought there should be a crackdown on crime, but David Gunn took over the system and decided that improving one small thing in the environment would make more of a difference. (To my environment-improving friend, this blog post is for you!)

In his book, Malcolm Gladwell says:

Worrying about graffiti at a time when the entire system was close to collapse seems as pointless as scrubbing the decks of the Titanic as it headed toward the icebergs. But Gunn instisted. “The graffiti was symbolic of the collapse of the system.”

So they waged war against the graffiti artists. The determination was made to never release a car for service if it had been vandalized. They would let the artists finish the three-night graffiti process and then immediately go scrub off the art or paint over it before releasing the car for us.

It made a difference.

Really, a home isn’t a lot different than a subway. As moms, we oversee the whole thing, and when things go bad we wonder where in the world to even begin to make improvements.

But aha! One concentrated little change can tip the whole thing.

Like when my husband decided to start making the bed for me every morning. Oh wow did that affect how I felt about conquering the whole house.

Or when I bribed my students with ice cream if they could go a whole month without complaining. They started policing each other’s comments, and the environment of the entire class warmed up.

Waging war on one little thing.

Now we can do that.

What would you pinpoint to start the change in your little neck of the woods?