I hadn’t showered or brushed my teeth, and the kitchen was an explosion of Caleb’s culinary arts project from the night before, so I sat down and watched a two-hour documentary this morning with my husband. (Do you see the reasoning that went on there?)

The cameras followed over a dozen men and one woman, as they raced on bicycles from Banff to Mexico over the Continental Divide.

It was painful to watch the riders cover hundreds of miles and then slowly start dropping out of the race one by one. We winced when the bikers stopped at the end of the day and pulled off their shoes and socks, to reveal huge blisters and swollen ankles. The man leading the race described sometimes falling asleep at night with food hanging out of his mouth, too tired to finish eating. But it wasn’t the physical wear that made them want to quit.

It was the head game.

Lean men had ridden bicycles over the Rocky Mountains, through grizzly country and over snow-packed trails, but they sat and wept because they were lonely on the ride.

Solitude was eating away at perseverance.

The one woman in the race said every hour she began to ask herself, Why should I keep going? But she was the only one on the road who could answer the question. A few times in the race she quit, but then she would stop for the night and be encouraged over the phone by her husband to keep going. At one point her family showed up in a “fan van”, and they told her she had to finish. So far she is the only woman to have finished the race.

I’ve been pounding God with this visceral cry every night, after I hang up the phone from talking to my newly widowed mother.

How can she be alone? How can she be one flesh with my dad for 46 years and now she’s just alone? What reason will she have to wake up in the morning and take a shower and live again –alone?

My mom’s solitude has been ripping a gash in my heart.

But now look at how God put this documentary in front of me, and do you see how wise I was to let the dishes sit for a few hours?

Here is truth, and you need this to land in your heart, too: 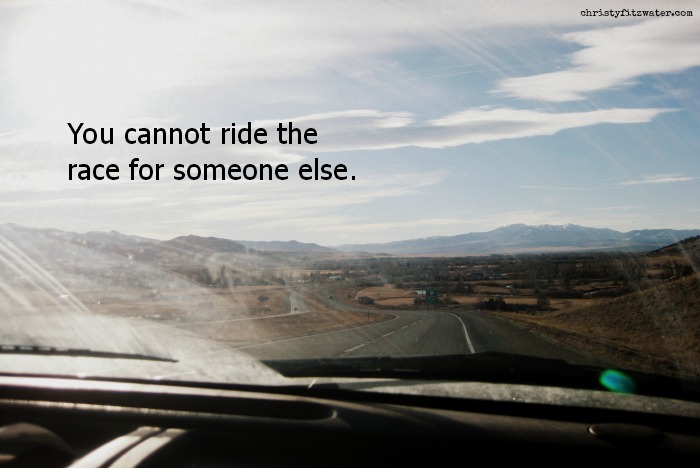 There is a solitude each person must face in this life, at one time or another, and it is a head game no one can win for someone else.

I told Matt, A race is what my mom is doing emotionally. She has just started out in Banff and has to get to Mexico -pedal stroke after pedal stroke. And she has to do it on her own. No one can do it for her.

Matt said to me, And you are the fan van.

That’s all we can be for another person –the encourager. You can do it. Don’t quit. I know it hurts, but look how far you’ve come.

We cannot ride that race for them.

But we can be on the phone and in the follow car and waiting with a piece of pie when they stop for a breather.

“Therefore, encourage one another…” (1 Thesalonians 5:11 NIV)