Friday is the day she hops garage sales with her friend. That’s when she happened upon this set of scales: 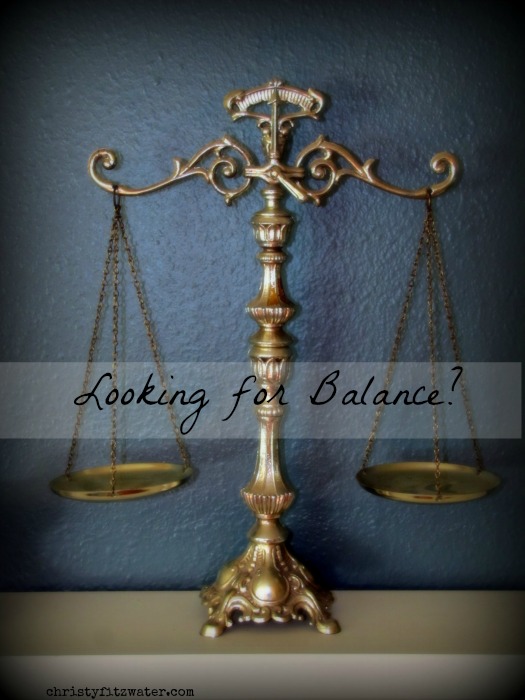 The scales weren’t cool-vintage old, just flaking-off-silver-paint old, but I couldn’t help thinking about our conversation on justice during Bible study this week, she told me.

Overpriced at $8, she considered she might pay $5 but passed them up and headed to the car.

I sat with my friend at her kitchen table, hearing this story and both of us looking thoughtfully at the scales resting temporarily on the fireplace hearth.

That morning I had also been pondering the conversation on justice. As I opened my Bible, the first verse I came to was Proverbs 11:1.

“The Lord abhors dishonest scales, but accurate weights are his delight.” (NIV)

It’s the reason we love the story of Robin Hood (and I’m afraid I can only think of Disney’s version when I say this.) There shouldn’t be a lucky few surrounded by bags of gold while the many live in rags. Hurray for fair distribution!

My family thinks the scales should be tipped uneven, but I say, No! God wants them even. I have to display them even.

What makes the scales even?

Only when some of the weight from one side is shifted to the other.

It means we slice off some of our hard-earned money and send it to our Compassion Child.

Raising the scales of justice for our little Haydy in Colombia, whose parents probably live on $200 a month.

It means when God puts it on your heart to visit a widow while you’re running errands, but you reason you don’t have time, you go anyway.

You slice off some of your day and put it on the side of the lonely woman.

Raising the scales of justice on her behalf.

It means when you have four older boys and you’re doing a little jig about no more diapers, you make it five and foster a little cutie.

You slice off your freedom and put it on the side of that diaper-wearing 2-year-old.

Raising the scales of justice on his behalf.

How does God define balance?

Jesus called it laying down your life.

…our fast track to delighting the heart of God.

“I am the Lord, who exercises kindness, justice and righteousness on earth, for in these I delight,” declares the Lord. (Jeremiah 9:24 NIV)

What are you doing to help raise the scales for the poor and powerless?