At the end of a long day, they gathered all of us kids around a huge fireplace at Quaker Ridge Camp in Colorado. It was the middle of summer, but this was a camp high in elevation that looked out over Pike’s Peak, so we came to the gathering place with our sweatshirts and wrapped in sleeping bags.

One of the counselors would open to his bookmark in Little Pilgrim’s Progress and read several chapters to us every night.

I don’t need to tell you that this was my favorite part of camp, do I? The book reading? Those people really got me.

If you haven’t read John Bunyan’s story of little Christian’s journey to the Celestial City, I urge you to do this and especially to read it to your kids. (Choose the more readable kid’s version.)

In Bunyan’s allegory, Christian leaves the City of Destruction and begins his dangerous journey. He meets up with characters like Obstinate and Pliable, and he struggles through the Slough of Despond until Help comes along. He faces the Hill of Difficulty, fights a dragon, and gets captured in Vanity Fair. It’s an action-packed story.

I’ve faced my own draw towards Vanity Fair as of late, but I have seen the peril and have been resisting with all my heart.

The journey toward the Celestial City is hard and dangerous for the soul. Lately I’ve been feeling it more than usual, but one of my students at school dressed up as a ninja for spirit week. That got my imagination going…

If John Bunyan were alive now and were writing his story, maybe he would paint Christian as the next contestant on the ninja game show. We would hear Christian’s back story and how hard it was for him to get to the place of finally standing at the beginning of the American Ninja Warrior gauntlet of challenges.

Bunyan would have a microphone and would call out Christian’s obstacles as he came to them. We would hear about the level of difficulty of each. Every slip of the hand or foot would be announced to the crowd.

Bunyan would describe the strength and skill required to get through each part of the course. The dangers of failure would be detailed along the way. But Help would be there, spotting.

We would hold our breath and pray for Christian to keep going, keep going.

Huge cheers would erupt after near misses.

We would admire his perseverance despite his obvious fatigue.

Everyone would watch for him to finish well and to ring the bell at the end. The crowd would go wild.

All of which sounds super thrilling, until it sinks in that Bunyan is telling a story about my own soul, my own Tuesday mornings, my own hands almost slipping off the rope, after a hard setback or a discouraging circumstance.

In Hebrews we get a look at real people on a real pilgrimage: 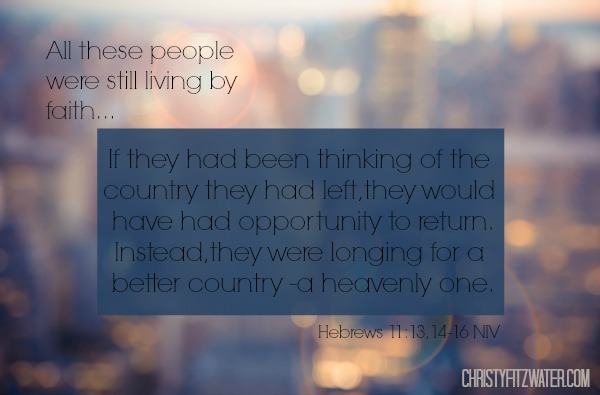 I want to live by faith, making it past the real obstacles that came up every day.

Maybe you feel like your days are drudgery and full of pitfalls, but step back today and think about your story. It’s about you and your great pilgrimage toward a fantastic city. You’re going somewhere important, and you are having adventures and coming through dangers. You’re tired, the way travelers on an epic course get tired.

But you’ll keep going, warrior. We’re all cheering for you.