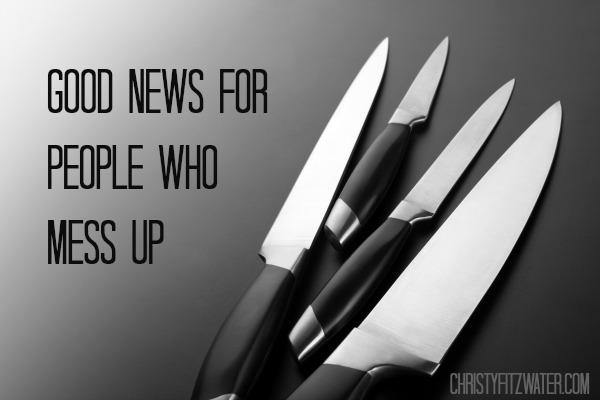 Matt found a new show for us to watch on Netflix called Food Network Star, and don’t you think he is the most chivalrous husband, to go searching for a program he knew his wife would like?

In this show, cooks compete against each other, to see who will be the next Food Network star. (Are you glad I helped you with that?)

Contestants have to be good cooks, of course, but they also have to be good in front of people. In every episode, they have to make food and then present it in front of the judges, a judging audience, and a camera. What I’ve found intriguing is that, as they do their spot, we see insertions of their own commentary about how they thought they were doing while they were presenting.

It was like someone removed me and replaced me with an idiot, one contestant said.

Oh my word. That is my life. It’s like I have 90 seconds with people and then I go home and insert commentary about how that 90 seconds went.

Like last night at church I was talking to someone about someone else (danger!danger!danger!), and I related what I thought was a humerous story. Then I turned around and found out there were about eight people listening to what I was saying.

Then comes the judging. Always the judging. Me saying to the camera how foolish I was for telling a story about someone else to begin with, let alone to do it in front of a whole bunch of people, even if I didn’t intend to. The Holy Spirit shaking his head in agreement.

And just like those contestants, I found myself with beads of sweat and pinched lips and wringing hands.

People who do well stay. People who blow it pack up their knife sets and go home. Only the most eloquent and most skilled will come back next week.

But Paul goes on to say:

Who will rescue me from this body of death? Thanks be to God –through Jesus Christ our Lord! (Romans 7:24-25 NIV)

Thanks be to God –there is no elimination. We mess up? We confess. We are forgiven.

We come back next week and try again.

But more than that, Jesus transforms us. We get better in those 90-second spots with people that happen all day long. A little forward progress every time, until that one day when we will celebrate not messing up at all. That’s the promise Jesus makes to us.

Now that was better, Matt and I said when Nikki Dinki presented her shrimp pasta. (You know I had to stop and say her name out loud.) We could see her improvement from the previous weeks.

By the grace of God, we are safe, and we will improve.