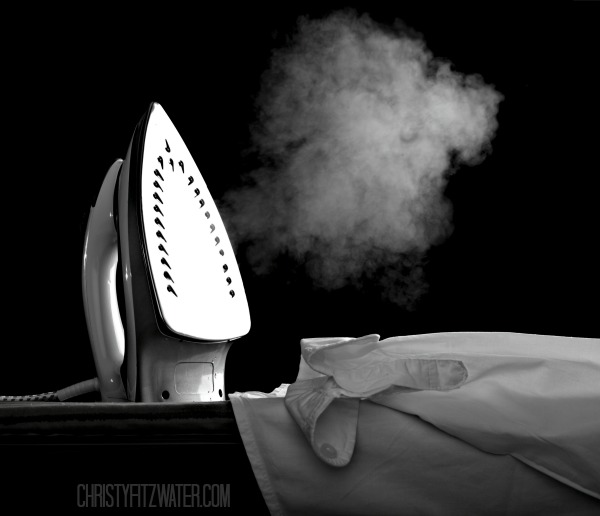 I had my friend on speaker phone the other day, while I was ironing Matt’s preachin’ shirts. One sleeve was giving me grief. I ironed one side smooth and flat, only to turn over the sleeve and see a new wrinkle I had accidentally ironed in on the other side.

“This is my life,” I told my friend. “Trying to live well and do good, only to discover a wrinkle in character pressed in firmly on another side of me.” (It had been a week of apologizing for a handful of offenses, and I was sliding into despair that I might never become a better person.)

Into these thoughts came my morning Bible reading of Psalm 36:1-4 (NIV):

I have a message from God in my heart concerning the sinfulness of the wicked: There is no fear of God before their eyes. In their own eyes they flatter themselves too much to detect or hate their sin. The words of their mouths are wicked and deceitful; they fail to act wisely or do good. Even on their beds they plot evil; they commit themselves to a sinful course and do not reject what is wrong.

David sings this message concerning the wicked, but what I hear is God’s message to me about the righteous. So I’ve flipped David’s statements, to create a clear checklist of what it looks like to follow God.

I watched the video testimony of a Jewish man named Ze’ev. His father survived the holocaust but lost everyone in his family. He believed there was no God. Ze’ev grew up as an atheist but then came to put his faith in Yeshua (Jesus). He described what it was like trusting in Jesus and said, “It’s like I had a broken conscience and it was replaced –I received a new conscience.”

Which takes me back to the ironing board and how I can spot every wrinkle in a shirt. In the same way, I can detect my sin. This is a sign that God is giving me a new, highly sensitive conscience. It reminds me that he cares about my life.

So I pray, “I see the wrinkles, Lord. Bring the steam and the heat.”