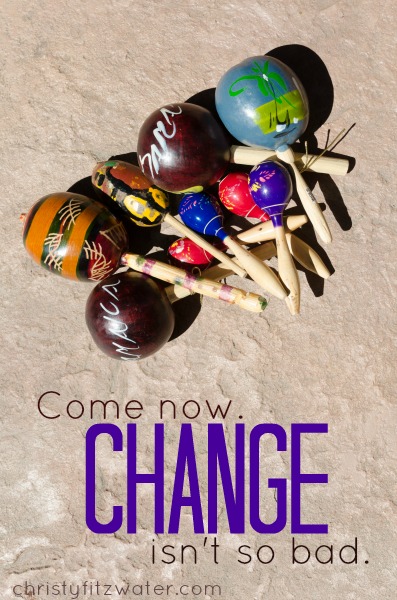 Music week, people. My students have to learn 25 Spanish sentences, and you could pass this test I bet. Trompeta, trombón, piano, flauta (not the fried kind), and tuba. It’s a list friendly to the English speaker.

So I’ve pulled out the Steve Green, and you should hear my husband say, “Really? Steve Green?” Shhh. My students don’t know that Matt and I were listening to Steve Green cassettes when we were in college in the late 80s. I’ll say “retro” and hope to get by with it.

But Steve Green sings some great Spanish songs. Today I turned on a latin-flavored worship song called En Todo Lugar. Go ahead –listen to it and see if you can stay unhappy. Try to keep your toes still. Five times. Listen to it five times.

And two-thirds into the song? Key change.

Say it the way we do in our house:

Taking it up a step, you feel the energy rise. Same song a little higher, a little bigger.

Sing to the LORD, praise his name; proclaim his salvation day after day.  (Psalm 96:2 NIV)

God made music, and music changes keys. So our lives have to make steps up, even though it’s uncomfortable and takes more energy. But maybe Latin guitar, percussion, and trumpet will say to you, “Hey, it’s not going to be so bad to move forward to a new place, eh?” (Okay, Latin with a Canadian garnish.) Say yes, yes, yes to where the Lord is taking you, and keep singing praises along the way.