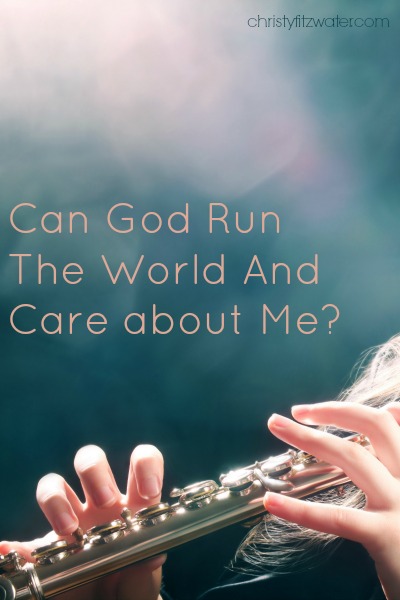 I’ve felt the weight –or maybe terror –of God’s greatness on a few occasions. When I saw the grey-green sky and felt the too-still quiet of pending tornado weather. When a nurse handed me my son for the first time. When I stood at the top of Going-to-The-Sun Road in Glacier National Park.

God is big. How could he possibly see the details of my life?

On Wednesday afternoon, I experienced that terror again, in an unexpected place.

The California Baptist University choir and orchestra filled the gym at my school, where the student body and faculty gathered to hear them. Instead of the bleachers, I chose seating on the floor, three chairs behind the director. I watched him take control of 150 student voices and instruments.

One song finished, and the director grabbed a stack of papers that made up the next song. He waved them in front of him, so the musicians could see the name of the song, which was printed in bold on the back.

He set the papers on the stand and opened the score.

Row upon row of music filled the page, and I realized he was seeing it all. He knew when the French horns came in and then approached a decrescendo. He knew when the tenors should sing loud and the violins play soft. He saw everything at one time.

After the next song, he turned to our students and told them he wanted to introduce the orchestral instruments to them.

Turning to the harpist, he introduced her by name.

How about a glissando? he said.

He knew the word to describe what her instrument did.

He introduced the bass player and then asked for a few notes from the viola and the violin. Clarinet, oboe, picalo. French horns and trombones. Trumpets and percussion.

He knew each musician by name.

He understood the nuance of each instrument.

Later that night, the two choir guys we were hosting sat on our couch, and we peppered them with questions about the choir.

At one point, you come down off the stands and stand in two circles around and within the audience. Do you have to sing more carefully when you’re standing closer to the director? my husband asked.

That man hears everything, they said. It doesn’t matter where you’re standing. If you sing the wrong note, he is going to know.

He is going to know.

I watched the director open the score and then raise his hands. Every eye was on him, and he drew a sound from the choir and musicians that I wish I could describe with words on a page.

He holds his hands with fingers up, like this, one of the guys told us, like he’s holding a baby. He says it’s like he is holding the whole choir in his hands.

When I consider your heavens,

the work of your fingers…

What is man that you are mindful of him,

the son of man that you care for him?

In watching the choir and orchestra director, I understand that God can see the whole but have an ear for the parts.

Think about what this means for us.

Mentally walk through one of your problems to its biggest and most out-of-reach components. God holds the sum of those in his hands. Then imagine him stopping to introduce you, to say your name out loud and encourage the world to listen to what your part is, the sound only you can bring.

It’s a fearsome control under which we’ve placed ourselves.