Can I just start by saying that I walked on the treadmill for 30 minutes today.

Have you ever spoken to a group with the help of a translator? I had help when I shared about Christ in Kampala, Uganda. It’s weird. You say something, and then the person next to you says twice as many words as you did. It requires a lot of trust. One time I was telling a story to people about my dad and a bunny he brought home. The interpreter mimicked my voice and did the same hand gestures I had done when I talked about the bunny. Oh wow. Did I really sound and look like that?

Not the best quality picture, but this is me on a rickety platform surrounded by Africans: 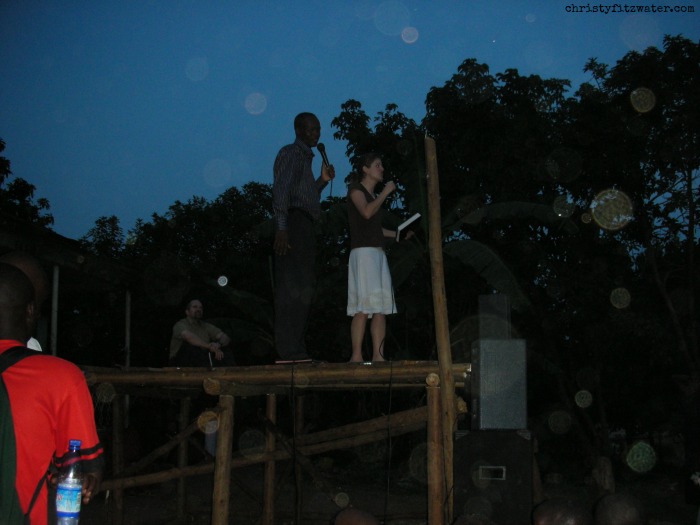 So on the treadmill I’m puffing through a 3 incline at 2.5 miles per hour, and I’m watching this Spanish interpreter speak his own native words but work to match exactly the meaning and tone of what the pastor is saying.

And I think –that’s what I want to be in relationship to the Lord. Me with a voice. Him with the content.

Translators imitate. They listen closely, which is hard work. They watch hand gestures, and the best interpreters not only present to others an exact match in word meaning but bring depth of meaning through their body language and facial expression. We can be this person.

One sentence at a time.