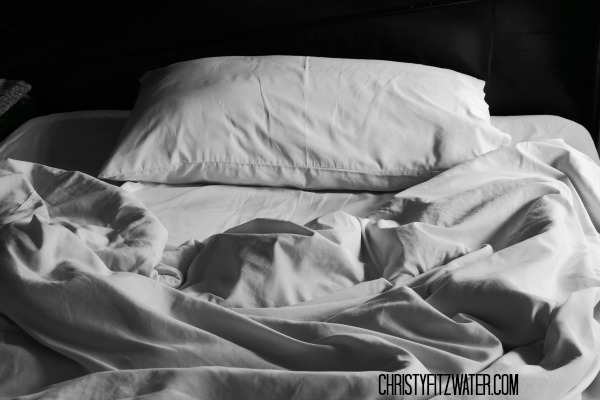 Years ago, when my kids were still young, insomnia introduced itself to me. I used to sleep solid all night, and then one night I woke up early, about the time bakers are waking up to get doughnuts going, and couldn’t go back to sleep. Insomnia became a regular part of my life. It wasn’t uncommon for me to get only four hours of sleep, maybe five.

For a few years I writhed and cried and moaned and called out to God in the dark, begging him to help me go back to sleep. Angry and frustrated, I added emotional misery to physical fatigue.

One night I got tired of being upset all the time, so I decided to change my response to being awake. (Matt would say I set my jaw to the wind.)

Instead of groping for a pair of boxing gloves, to have it out with God while I tossed and turned, I began to say two powerful words: Okay, Lord.

If God was not going to remove the insomnia from my life (which I believed he could –hence the anger), then I chose to believe he must have been offering the trial to me as something necessary. I decided to open my hands and accept what he was allowing to happen.

In the story of Job, we read about the worst day a man can experience. After a day of calamities, Job’s wife turns to him and says, “Curse God and die!” But he says to her:

After losing all of his possessions, servants, and 10 children, Job is willing to look to heaven and say, Okay, Lord.

When I wake up early in the night now (and this has been happening for over 15 years), I lay awake and pray, but it’s not an angry lashing out. It’s a service to people who weigh on my heart –a strange, wee-hour vigil I keep. I pray for people who are hurting or who need courage. I pray for my kids and my husband. I choose to use my mid-night awake time instead of despising it.

What difficult circumstance are you fighting against? How might your experience change, if you were willing to say, Okay to God?