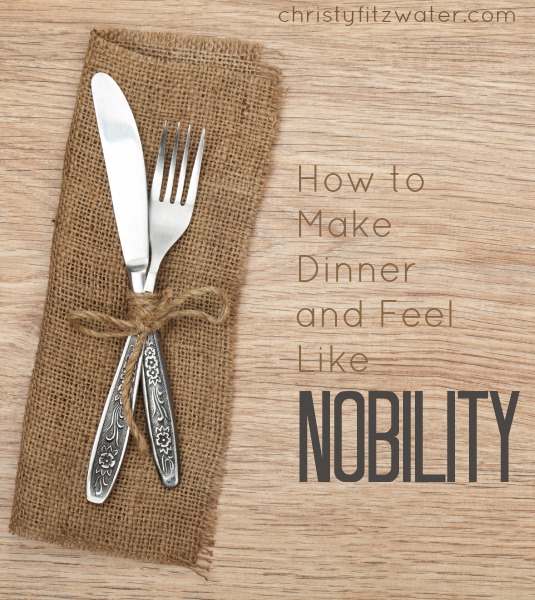 Yesterday morning I spent an hour making sausage potato bites for my guys. I found the recipe in the 2012 Celebrate magazine, and Matt and Caleb got tears of joy in their eyes when they tried them for the first time. A combination of Jimmy Dean, hashbrowns, and Parmesan, these little babies are what Montana men should eat for breakfast.

But you need to know that I never would have made these if God had not been transforming my heart over the last few months.

It’s a long story that I’ll tell you sometime, but I had come to the place where I despised cooking and felt like a complete failure to my family when it came to food. It was a place of shame for me, but through several events toward the end of 2014, God spoke personally with me, healed some broken places, and began renewing my joy in providing food for my family.

The day before I made sausage potato bites, I had been reading. (Like I would be doing anything else.)

I read an article in the National Geographic, December 2014 edition, about an impoverished community in Mexico where the kids grow up and never leave because the food and family time around the table is so binding.

I learned about the “sobremesa”, which is an extended time of talking around the table after the meal is over.

Later that day, I read an article about a woman who had been rescued by American soldiers from a Nazi death camp. She weighed 68 pounds when they found her and was literally almost starved to death.

God has been wrapping around my heart the truth about food and cooking, the way Matt hugs his just-out-of-bed warm body around me when he wakes up in the morning.

(Truth is something warm, and sometimes you don’t even know how cold you’ve become until it touches you.)

What I learned from the Mexicans, who are poor in money but rich in community, is that food has to do with love, and it is something almost sacred that brings us together every day.

“Cooking must be done with love,” says María, stopping to tie her braids together. “There are women who cook without love, and it really doesn’t turn out well. If I feel preoccupied, I tell myself, Lock up the problem. And then I cook with love.”

So I paid $2 for fresh sage, and what a heavenly smell. I lovingly cut up that sage, stopping to worship the God who created herbs, and then tossed it in with the sausage mixture.

Because there is a message I need to give to my boys, a message I’ve been neglecting for a long time.

You are important to me. Let me feed you good food.

The wife of noble character…provides food for her family…  (Proverbs 31:15 NIV)

To cook a meal for your family is to do something noble in character.

So set the table, put simple food on it that has your love stirred into it, and teach your family the word “sobremesa”.

Now off I go, to make a homemade marinade for a beautiful salmon fillet we’ll eat for dinner tonight.

What’s for dinner at your house?