We did it. We finally found a sport I enjoy and can perform without looking like a complete idiot. Our friends loaned us their kayaks, and we went to Tally Lake yesterday for a family day on the water. I was smiling from the second I sat down in the kayak.

It was a perfect day –not too hot or too cold. The water was warm (that is no small thing in northern Montana). We slowly paddled our way around the shoreline, enjoying the scenery.

Here’s the view from the end of my kayak: 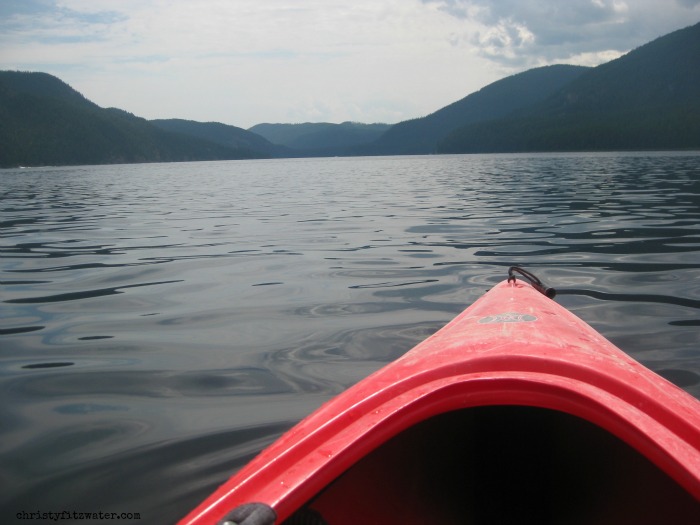 On our way back, we stopped at a cliff the boys wanted to jump off of. I watched safely from behind the camera.

They scrambled up that cliff so quickly and offered many manly poses for the camera (which I will spare them by not posting here, although I hope you can imagine). Then it was time to jump. Matt took a running leap and performed this beautiful pencil jump. I gave it a 9.7. 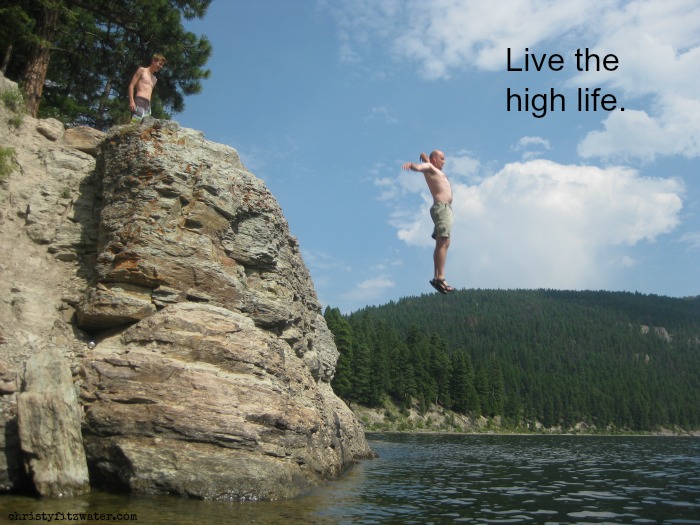 Cliff diving seems to look really fun until it comes time to actually launching your body into mid-air.

He backed up and said, Count for me, dad.

Finally Caleb gave it a go and flew out past the cliff. From the water he came up sputtering with sheer happiness. (Sheer –get it?) 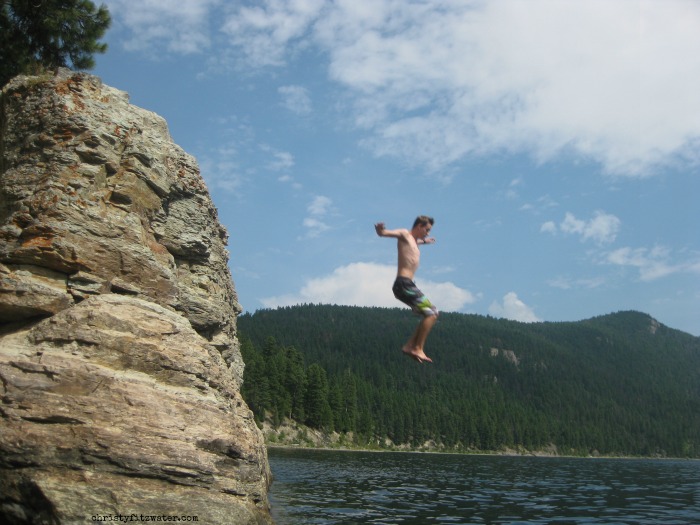 Oswald Chambers wrote a powerful little book called, My Utmost for His Highest. Oh how poetic that sounds. Of course, we love Jesus and we want to go to the highest place with him. Yes, we want to bear fruit for the kingdom. Yes we want to live sacrificial lives of obedience. Well, that sounds all nice until your toes are curled over the edge of the rock.

Jennie Allen, in Anything, talks about how uncomfortable it is at the edge of the cliff. God’s asking you to do something insane, like give away money you could really use or fostering a kid or giving up something you love. Jennie gives this advice:

Jump or crawl down.

If we’re enthusiastically climbing up for “his highest”, then we eventually come to a crisis of faith where we’re either all in, launching our lives out into the air by faith, or giving in to fear and crawling away from the action.

There I was in the kayak, listening to my husband instruct the kids to “jump way out”, so they wouldn’t hit the rocks of the cliff on the way down. Ummm. FEAR. I swallowed it, but my mother’s mind went nuts with everything that could go wrong and how we’d have to life-flight the kids out, and could I ever forgive myself?

Then went my little girl… 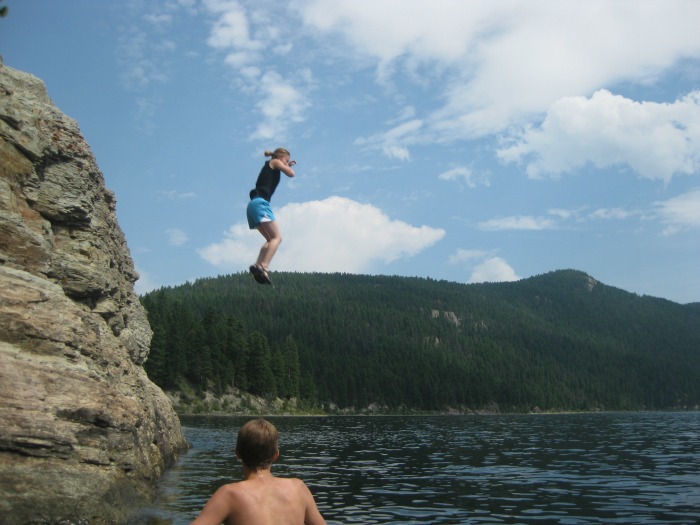 I’ve encouraged my kids to climb trees. I’ve helped my son pack his food for backpacking into grizzly country. I’ve signed every waver allowing the kids to do activities that require paragraphs explaining possible risks of injury. I’ve always wanted them to live daring with their bodies.

More than that, I want them to live daring with their souls.

There will be fear at the top of the cliff –but I want them to know the joy and I’m so glad I did it! after the splash at the bottom.

Joy and risk come as a package deal.

This was a 14-foot cliff. Matt reminisced about jumping a 65-foot cliff in Texas. He asked me, Would you sit here and watch while your son did that?

So really –do you want God’s highest? Do you want to follow him? Because it’s UP. And the 14-foot risk is just the warm-up.

Jesus says, “Whoever does not take up their cross and follow me is not worthy of me.”  (Matthew 10:38 NIV)