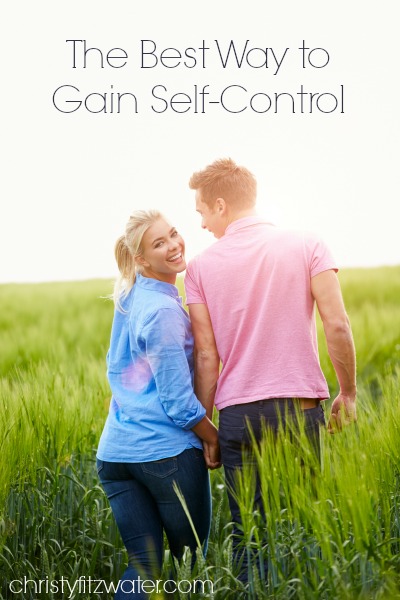 Husbands are grown boys, you know, and boys need to find out what makes you crazy and do it. Just to see you be crazy.

If I had known this, I never would have let on that I don’t like the claustrophobic feeling of being restrained. But somehow we were sitting on the couch one night, and I may have started it, but soon he was tickling me and holding my wrist tight. I might have become panicky-eyed and irrationally violent.

Nowadays he’ll reach over and grab my wrist, as a kind of experiment to see how long before I lose it.

Should a pastor be able to get such an ornery glint of evil teasing in his eye as that man can get?

Where there is no revelation, the people cast off restraint…

When I think of people casting off restraint, I picture me on the couch in fight-or-flight mode, trying to wriggle out of my husband’s steel grip.

Of course, that is all in jest. The same hand that can squeeze my wrist so tight just swung out and grabbed my hand the other night. We were leaving a high school basketball game, walking in front of our son and his friends. Matt wrapped his warm hand around mine as we walked along.

So Matt grabbed me in a tight embrace, and we looked all lovey at each other, because what else can old people do for fun besides embarrass their teenagers near to death?

I thought and thought about the little statement in Proverbs, and I think it means that when people have no vision or revelation of who God is –when they don’t understand the depth of his love mixed with the grandeur of his character –that’s when they wriggle and kick and do just about anything to get out from underneath his rules.

Let me go! they scream.

But when we see the hands that carved the laws as being affectionate, protective, and gentle –well goodness, only a fool would want to escape that. That’s something you sink into and that makes you go all soft on the inside.

So the best I can figure it, if we want to be self-controlled, restrained people, we need to see and absorb the love of God. We spend time with him and memorize his word like it’s everything. We look for all the ways God loves us and grow to appreciate how many ways that is.

And then his rules become what we want more than anything, because they put us in the grip of a warm hand.