I woke up the Monday after Mother’s Day, to read that almost 20 people were injured by a shooter in a Mother’s Day parade in New Orleans.

The evil in the heart of one man damages a crowd. And me.

Romans 5:15 (NIV) reads just like the Fox news headlines. “…the many died by the trespass of the one man…” The sin of Adam triggered the bloody soul death of every man to follow. It makes one want to close the Bible the way one clicks off the television when the news is too dark to absorb any longer –except Paul has better news. 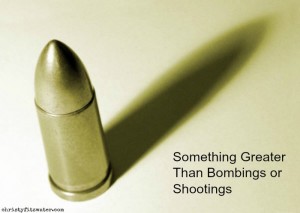 “How much more did God’s grace and the gift that came by the grace of the one man, Jesus Christ, overflow to the many!”

Paul says it again, “For if, by the trespass of the one man, death reigned through that one man, how much more will those who receive God’s abundant provision of grace and of the gift of righteousness reign in life through the one man, Jesus Christ.” (Romans 5:17  NIV)

The gift of Christ is not like the bombing, the shooting, the rape, the abuse, the abandonment.

How much more it gives instead of ripping away.

What if a woman has this gift –this love and grace of Jesus received into her soul? How much more life can be given than one bomb could ever take away. How much more grace could overflow onto a crowd and bring healing.

One man premeditates evil. Buys bullets. Loads a gun and tucks it away. Drives to a parade full of hundreds. Pulls it out and wounds on purpose.

Let the women of THE GIFT premeditate grace and life. Let us be filled with the love of Christ before we work for the day, while everyone is still sleeping. Let us strap on grace before making breakfast. Think about how we will share it. Go to where the people are.