We were looking at one week with my brother-in-law, and I knew going in that it was going to test me in all of my weakest areas. So I’ll confess that the week before I reenacted Chernobyl for my husband.

“This is going to be one big fail,” I cried.

But my sister-in-law had earned a trip to Guatemala through her Noonday business, and it was a once-in-a-lifetime trip. And those tickets were purchased the month before my brother-in-law was hit by a drunk driver and ended up with his driving leg in a boot for three months.

So I wanted to help, with all my heart, so that she could still take that trip. But it meant facing all those places where I feel like a regular failure, failure, failure.

Now here I am on the other side of that great adventure, and you won’t believe what my Bible reading was, on the first morning back in my own home.

In John 6, we read that the disciples are crossing a lake, and they’ve rowed out about three miles or so. A strong wind is roughing up the waters. At this time Jesus approaches, walking to them on the water. He tells them not to be afraid.

Then they were willing to take him into the boat, and immediately the boat reached the shore where they were heading. (John 6:21 NIV)

Immediately the boat reached the shore where they were heading? 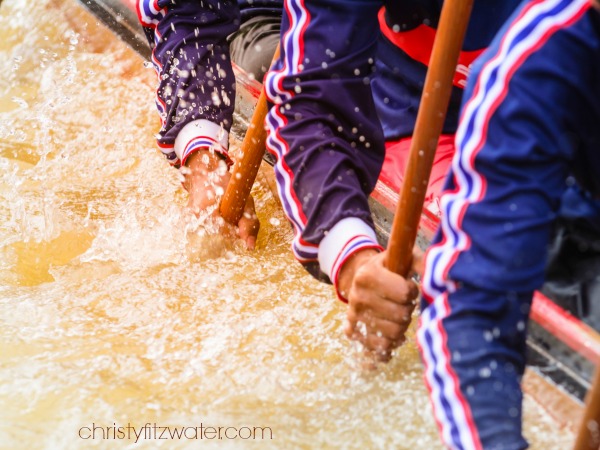 That is a super cool story that reveals the depth of Jesus’ power, but it is a unique event. Skipping the wind and the rowing and the choppy waters –and getting us right where we want to go? That is what Jesus can do for us, but it is not his modus operandi.

I know this, because I just spent a whole week where I needed to feed three little kids (although my mother-in-law and Panda Express helped out a LOT). I accidentally let the puppy escape and had to chase him down twice. As for handling the kids, one morning I had to apologize to Zane, because I had been crabby and snapped at him about something ridiculous the night before. He was kind enough to forgive me, but it was no instant boat transport to peaceful shores, ya know?

But I think I had a few shiny moments of growing while rowing. (I don’t know –rhyming?)

I petted the dog several times. (He is cute, with the whole floppy ear thing.) I celebrated a lost tooth and let the boys get in my car through the trunk pass-through. I spent eight nights away from home and did not die. I even made two meals, which seemed like two meals more than I was capable of. (Yeah, I really need to grow in the cooking thing. Working on it.) It was a special week, and I’m so glad I did it.

Let’s not ask my brother-in-law if he’s glad.

Now let’s bring all of this to you and whatever challenges stand in front of you right now –maybe things you know you need to do and want to do but are afraid you’ll fail?

There’s a strong wind. A boat. Oars. Miles to go before you reach the other shore. Sorry, but probably Jesus isn’t going to just immediately get you to the other side. I mean, he could, but…probably won’t.