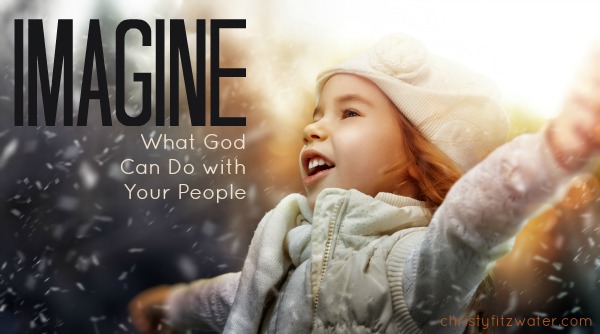 When we took the kids to Disneyland for the first time, they were in high school. As we talked about our trip to California, our son was excited about Disneyland, but our daughter acted cool.

Disneyland was for little kids, you know.

Until we got there, and you should have seen her face on the Toy Story ride. She smoked us all with the Astro Blaster, and from that moment on she gave up her too-grown-up bravado and enjoyed the wonder of the place along with the rest of us.

My favorite ride? Soaring over California. You can smell the orange groves as you fly over. I was five years old on that ride.

Disney invented the word “Imaginering”, and first of all I respect them for making up a new word.

Second of all, I think they are amazing people who come up with new ways to make even adults smile with delight.

Followers of Christ have to imagineer.

Peter Pan. He only had to regain his imagination.

Peter remembered how to see what wasn’t there, and that’s when Neverland displayed all of its color and delight.

One time I watched my mother-in-law and her sister walk among Alzheimer patients at the nursing home, talking to each resident with the most tender love and cheerfulness I have ever seen. Some residents drooled and could only make unintelligible sounds. Some stared, seemingly lifeless. What an imagination it took, to picture those end-stage Alzheimer patients as people.

Like a boring adult, I tend to see the people in my world only as who they are at that tick of the clock.

But Jesus looked at people and saw what they could be.

What an imagination he had, to see me as someone who could one day be holy.

Tomorrow is the beginning of a new year, and we could try this exercise on day one:

Let’s sit down with a piece of paper and make a list of the people in our lives (including most especially the people who make us crazy), and let’s use our imaginations. Who can each person be if Jesus transforms their lives? Let’s pray for what they can be instead of what they are right now.

What a year it could be.