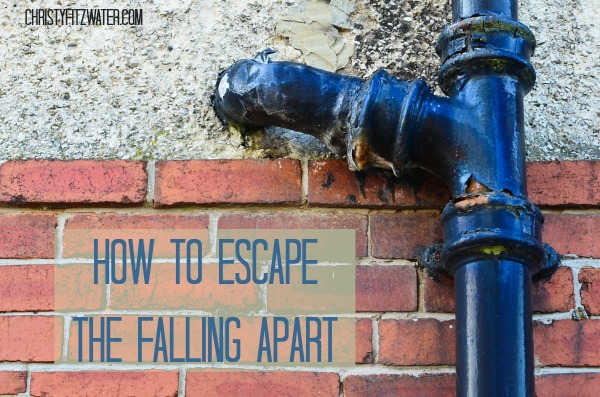 In the same day I read about corruption in Lagos, Nigeria, I handed that man of mine paper towels while he was flat on his back on my kitchen floor, trying to figure out why everything underneath my kitchen sink was wet.

I tried running the water, and nothing leaked.

So he left the cupboard empty and said we would watch and see. Pretty soon I was washing dishes, and as soon as I ran the garbage disposal we could see a damp spot growing on the paper towels underneath.

The Internet says when your casing goes there’s no helping it but to buy a new garbage disposal.

And nothing says, Happy Valentine’s Day like new plumbing.

Next day I’m going over my memory verses. (Insert teacher voice –have you started memorizing a verse yet? Time’s a waistin’.)

One word that I have been saying by memory every day for weeks means something more on this day:

That means over time you grind up so many vegetables your teenager should have eaten that it wears out the casing of your disposal.

Over time, so many leaders in a row make selfish decisions that National Geographic (January 2015) says of Nigeria:

Corruption is what’s wrong –and because much of it exists on the federal level, Lagos is largely powerless to overcome it.

But Peter says to the believers:

…he has given us his very great and precious promises, so that through them you may participate in the divine nature and escape the corruption in the world caused by evil desires.  (2 Peter 1:4 NIV)

Corruption is depressing and means drips in sinks and injustice in countries, but I think it’s the most hopeful news that we can escape the very corruption in our souls by way of promises.

Any place where we feel like we’re corroding can be remedied by a promise, and that’s cheerful repair work there.

So where is it that you can feel cracks in your character?

What magnificent promise of God can act as the JB Weld you need to seal up a weak place? (I solemnly use the phrase “JB Weld” in honor of my father, who would be glad I threw a manly term into my girly blog.)

Magnificent Promise #1: We CAN escape corruption.

That’s good news in this falling-apart world of ours.