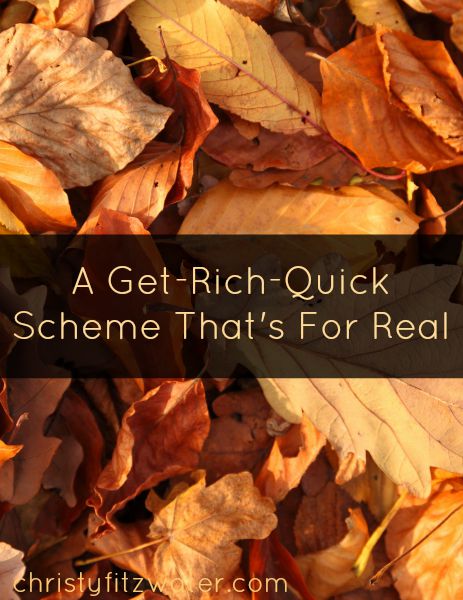 He’s four. On the way home from his third day of preschool, he told me only two of the girls in his class like him and the rest don’t.

“No, they don’t. They told me,” he said. I mentally apologized to him, on behalf of womankind.

“I said something nice to one of the girls. Now she likes me,” he said to me yesterday.

I’m giving him a ride home from my school a few days a week. In exchange, I get to hold little boy hands while we cross the street and listen to how he and this other boy became ninja buddies.

“Everyone needs a ninja buddy,” I reply.

So yesterday he wanted to go outside after school. Some leaves had fallen in the grass, in response to dipping nighttime temperatures. He was thrilled.

And I had wondered what he would play with outside at my house.

I pointed up to the tree still full of leaves. “Sure will be fun when all of these fall off, and then there will be enough to rake into a huge pile and jump in.”

“I’m gonna do that,” he said. Head cocked sidewise.

So I sat on the step and watched him pile up all 15 of the leaves that had fallen. Then he walked off, turned around, lit out running, and jumped right onto that pile. Came up smiling.

Right there on the step I decided I was about as rich as people get. I have leaves in my front yard and a borrowed 4-year-old to remind me to enjoy them.

Sure is a lot of bad in this world –I know it.

But we can “give thanks to the LORD, for he is good” (Psalm 107:1 NIV.) Thanks for the small things like leaf piles imagined big and ninja buddies and even girls who don’t like you until you say something nice to them. Then we can know the riches of God’s goodness right in the middle of all the hard.