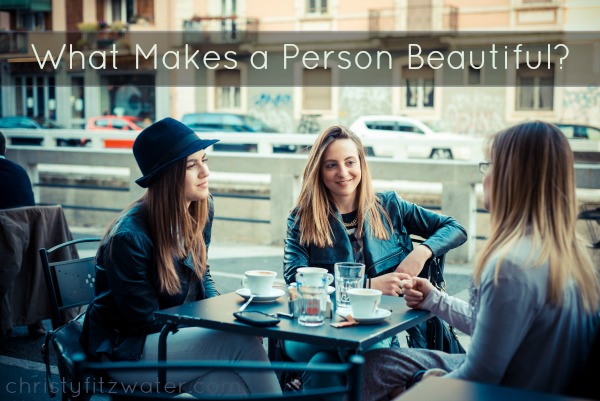 It could be due to the hour I spent at the mall eating fries, a lot of fries (DQ fry sauce is so good!), and then going to try on clothes in front of a full length mirror. A bad plan. To say nothing of the fact that I skipped my workout routine again that morning.

Walking though the “mom” section looking for shirts that would act as camouflage (to cover the stomach that stretched twice to bring two kids into the world) –that’s a little depressing at times.

I know what beautiful is, though. I saw it last week at a party. Two of my girlfriends sat close on a couch, one leaned in with her whole body, eyes focused, listening to the deep stuff. An hour later I looked over and saw that same friend leaned in listening, this time with someone new. She was giving every ounce of her soul, in the middle of a party, to care about people.

She doesn’t know it, but I sat and watched her for quite a while. That’s what loveliness does –grabs your attention, so you stop and take a second look. Makes you want to soak in the view to feed your soul.

That’s the kind of beautiful I want to be. I wouldn’t mind so much passing up the young, still-have-a-flat-waist clothes, if I could just be the kind of gorgeous that leans in close to care about people.

After a woman poured expensive perfume over his head, the people in the room gave her a hard time. Jesus said:

What demonstration of loveliness will you make today?