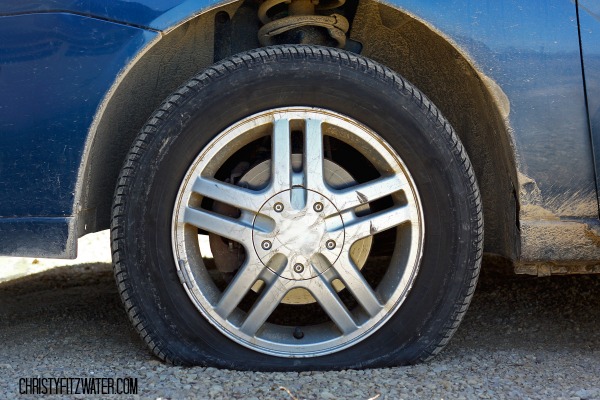 He called on his way home from fishing, but I could tell there was something wrong.

“Would you believe I’m just a few blocks away from our tire store? Why couldn’t the tire have blown just two minutes later? I’ve got a problem. When we bought the new rims this year, I didn’t realize my tire iron wouldn’t fit anymore.”

Then we played that fun marriage game where the guy tries to describe to the girl what tool he needs from the garage.

After figuring out what he wanted, I drove the equipment to him, only to find out none of what I brought worked. I was frustrated. Lord, really? Why couldn’t you have gotten Matt a few more blocks down the road?

So I drove to Les Schwab and played another game of “try to explain what you need to the car guy behind the counter.” That resulted in me calling Matt and handing the phone to the guy.

I am such a girl.

Would you believe the man loaned me the tool we needed? “How soon can you get this back to me?” he said. I told him five minutes. By then it was 5:40 and close to closing time. I lied –it was 5:50 when I returned it. I told the Les Schwab man he was my hero.

At home that evening, Matt looked at me and said, “Can you imagine what would have happened if that tire had blown while I was out fishing? An hour away from home, in the boonies, with no cell service and no fitting tire iron? How good was it of God to have me lose the tire just a few blocks away from the tire store.”

Well, yes. How good it was. I voiced my agreement.

And how nice of that guy to let me walk out of his store with the tool I needed. He took a risk that I was telling the truth and would return it.

Give thanks in all circumstances; for this is God’s will for you in Christ Jesus.  (2 Thessalonians 5:18 NIV)

Once again I have been schooled to hunt for the good in every circumstance, instead of defaulting to griping.

And you? In what hard situation do you need to practice thankfulness today?