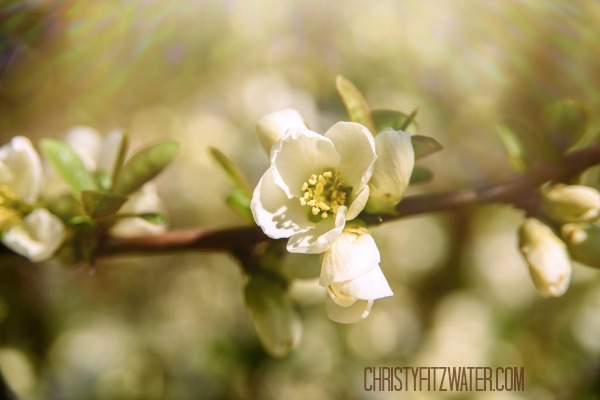 It was a mistake I became aware of too late –taking the inside ordering lane at McDonald’s. The people on the outside track can pull straight forward to pay at the window, but the drivers on the inside have to work to merge.

I ordered a crispy chicken snack wrap and a yogurt parfait and then waited for the other ordering car to pull forward so I could slip in behind him.

Except the car behind him ordered and came in close on that guy’s bumper so that I couldn’t pull in. It’s okay. It’s okay. I’ll pull in right after him. Patience. I nosed my car forward a little, to communicate to the next driver that I had been waiting. But he quickly pulled in close on the bumper of the guy in front of him.

Patience over. I imploded.

In the same second that flames of anger licked at my heart, I turned my head to the left in exasperation. My intention was to mutter under my breath, but instead I saw, tucked into the corner of McDonald’s, a large tree that was breathtaking in full white bloom.

“Soft,” the Holy Spirit said to me.

Soft, I repeated out loud. I turned my head back to the driver in front of me and loved him. Chose to love him. God doused the anger that had roared to life inside of me. This all happened in a matter of seconds.

Before I left the house that morning, I had been meditating on this phrase from Colossians 1:27 (NIV):

Christ in you, the hope of glory.

My prayer had been a plea for God to reveal his glory inside of me, because I hadn’t been feeling like there was much glorious going on in my soul lately.

I wasn’t expecting to experience the glory of Christ at McDonald’s an hour later, but there it was. I watched the rude driver in front of me, as he laughed with the lady passenger in his car, and I was in awe that I had just had an incredible moment with God in my own car. Christ had softened my heart on behalf of this man, and he didn’t even know. He didn’t even know that love had happened on his behalf.

Glory is available. Maybe you just need the hope of Christ’s transforming power for yourself today?

So I pray you will choose to open your heart to Christ. As you do, I pray he will demonstrate his glory by the work he does in the hidden places of your heart.