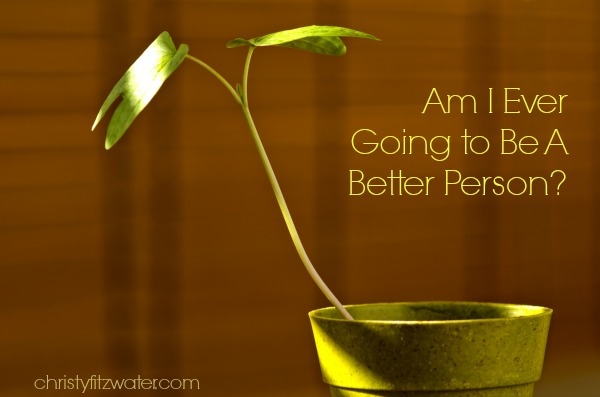 The one plant I’ve had for almost 20 years. It’s a prayer plant, and no matter how extreme my neglect, I can’t seem to kill it. Its leaves fold up at night, and it begs God for one more day to live.

The second plant was purchased when I started teaching two years ago, because my daughter suggested it would add warmth to my classroom. A small little shoot was all it was, but I knew that as I grew as a teacher it would grow, too. I brought it home the next May, so it could die with dignity on my kitchen counter. I called in the family, because I could see it was going any time. But it shot up a little green leaf.

So I started watering it again.

Now these two plants sit side-by-side in the living room, on the end table by the couch.

I talk to them.

The prayer plant is flourishing, with more blossoms in the last few months than I’ve ever seen it produce. I smile and tell it, “Good job!” Then I make a pathetic face at the sad little plant next to it. After two years it is maybe five inches tall, with only as many leaves as I have fingers to count them.

My husband is outraged and sticks up for the plant, as if it is an underprivileged child who needs a guardian.

I have to admit, it does have a lot of new leaves. I’ll keep watering it. Matt will keep cheering it on and will speak as its protectorate.

One of my favorite verses comes to mind:

Therefore we do not lose heart. Though outwardly we are wasting away, yet inwardly we are being renewed day by day.  (2 Corinthians 4:16 NIV)

Inwardly we are growing every day. It may be growth as lavish as that prayer plant of mine, with its exotic blooms, or it may be a tenth of a millimeter at a time like my little plant, against which I shall speak no ill.

It may be two years before you can look at your heart and say, Well, I guess I am growing.

But if you know Jesus, he is changing you. He is doing the slow work to make you a better person than you were this time last year.

What growth can you see Jesus making in your character?