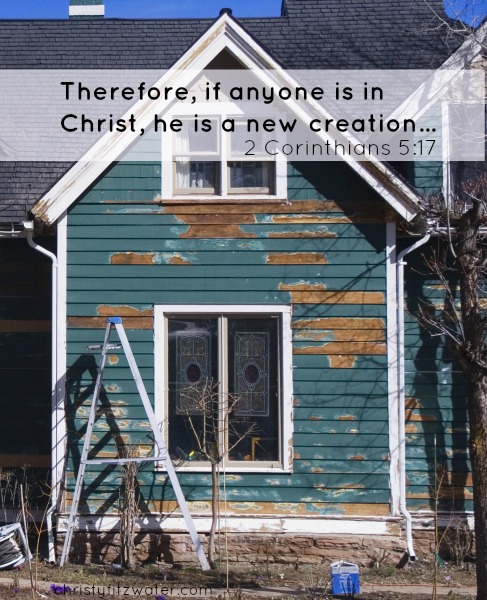 It was a cold and rainy Sunday afternoon. The snow level came down low on the mountains behind our house. So we finished lunch, and Matt took his favorite place in the recliner next to the fireplace. (I say fireplace. It requires an electrical outlet, but we are able to suspend reality well enough to enjoy it.)

If Matt pushes out the recliner and covers himself with a quilt, the fireplace vent blows up underneath and makes for the coziest location in the house.

So I became his really good friend and asked if I might please slide my legs up next to his.

We snuggled and sat through back-to-back episodes of Holmes Inspection on HGTV.

Enjoying the home inspector man’s Canadian accent, we watched as he did an inspection of a home for a young couple. They had bought a 100-year-old home, after an inspector told them it was a solid structure, but soon they found out it had a window leaking and some mold issues.

Holmes came in and did a quality inspection for them, and he agreed their leaky window was causing extensive mold problems.

Then he found dangerous chimney issues.

Then wiring that was so bad he wondered how their house hadn’t burned down already.

There were sewage pipe leaks that were destroying a whole wall.

Then he went outside and found a gutter pipe in the back corner, with some bricks around it. Removing the bricks, he discovered the entire wooden beam support structure for the home was rotted, and water was running from the pipe straight down into that hole, causing severe water and mold damage. He was able to remove the foundation beam with his bare hands, because it was so rotted.

Holmes was astounded that the previous owners had tried to cover that gaping hole in the foundation with a few bricks, so the inspector couldn’t see it.

The more he renovated the house, the more trouble he found –so much that they had to make it into a two-episode show.

At some point during the episode, I thought, That home is my heart.

The Spirit has come in for inspection and renovations –minus the Canadian accent, eh?

Mr. Holme’s right-hand man was interviewed in the middle of the house renovation process. He said, At this point I should be moving forward, but I keep discovering problems, so I have to move backward and fix things.

I imagine this has been like the first three decades of my walk with Christ.

So let’s see what’s behind these bricks here, says the Spirit.

Jesus tears out the old –the rot and the mold and the dangerous things hidden behind the façade of my soul.

Like just a few days ago when the Spirit said to me, You’re holding a grudge. Well, sure enough I was.

Sledge hammer to that.

Then came our favorite part in the show –fresh drywall and paint, new flooring, a safe and functional chimney installed. A new window was placed where the old one had been. The wife came in and cried when she saw how beautiful it was.

Safe and good and clean.

Jesus is renovating everything inside us.

Keep smiling, Mr. Holmes says to the homeowners, when they can see there is still a lot of work left to be done.