I breathed in through the nose, out through the mouth, as I scribbled my name on the Visa receipt for that boy’s prom tuxedo. And I had to get air the same way when he brought his six feet down the stairs looking like this…

I buried my face in that royal blue vest and said proud momma things –the kind that make a boy wanna leave five minutes early to pick up his date.

But it was the shoes.

I had stood over his shoulder at the bridal shop that he hadn’t been able to find on his first pass down Main Street, the store with the long outdoor banner declaring “TUXEDO RENTALS”. The young woman had asked questions, and he had looked to me for answers. Did we want to rent shoes, too?

No, he has a pair of nice black dress shoes, I had said.

Which is why I was surprised when, a few days later, he came home from a shopping excursion declaring he had bought shoes to go with his tux. That’s when he proudly opened the box of Converse tennies. 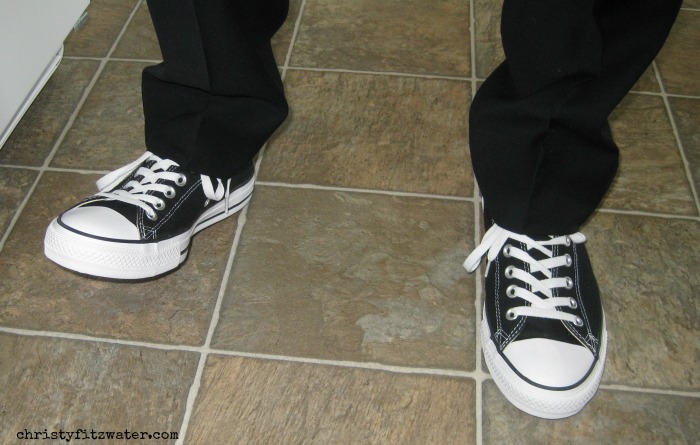 ‘Cause that boy ain’t got nothin’ if it ain’t a touch of flare.

And I say that’s what your people need on a Monday –a touch of flare. Something they don’t expect that forces a grin even from the most dreading-this-week soul. My Grandma called it “puttin’ on the Ritz”, which is just putting an extra something special into everything we do.

I don’t know what you can manage –something surprisingly cheerful or grateful or kind? Or chocolate?

Why else would that boy wear those shoes if it weren’t to stir up a smile?

We can do that –stir up an unexpected joy in people.