My husband and I tell the story differently.

He claims he had just ridden his bicycle home from a friend’s house. The garage door was closed, so he propped the bike against the wall of the house. The bike slipped, so he bent over to pick it up.

We agree on the part where I screamed bloody murder and yelled at him in scared anger for the next ten minutes, and where he yelled back that he was only propping up his bike, for Pete’s sake.

Great moments in marriage. Mark it down.

There’s a verse in Scripture that brings up a similar skin-crawling fear in me.

Cain has offered an unfavorable sacrifice to God and now is angry at God. God sees Cain’s downcast face and says to him:

Maybe this verse is only terrifying for girls who fear what could be outside in the dark. (Do you run and close all the curtains like I do when your husband is out of town?)

If I do not do what is right, sin is crouching at my door.

Makes the hairs on the back of my neck stand up. 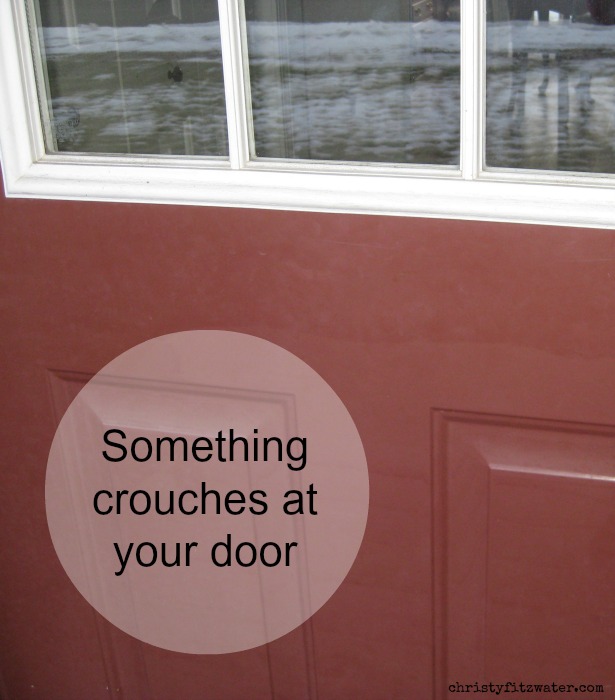 Sometimes I can feel it, the hot breath of sin. When I do something well –when I have a brilliant moment of success –I can see pride crouched low and leaning forward, right there on my own front porch.

Waiting for me to open the door. (Cue fists pounding a driving beat on the low end of the piano keys.)

It desires to have me, but I must master it.

Know what waits in the dark to destroy you, and throw the deadbolt.